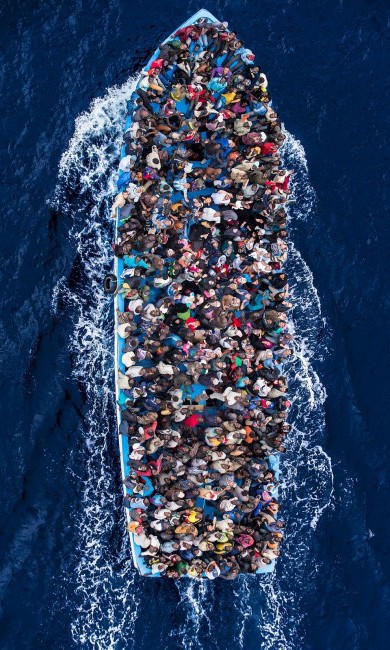 Last week, the shocking image of a young boy drowned with 12 others while trying to escape the Syrian conflict brought attention to the European refugee crisis in brutal fashion. This incident follows a series of horrifying incidents in Europe. Reports of refugees dying while trying to enter Europe seem to be coming daily.

The Greek islands are one of many landing points for refugees trying to enter Europe from North Africa and the Middle East. Ketty Kehayioy, a spokesperson for the United Nations High Commissioner for Refugees (UNHCR) told The Guardian that, “the situation on the islands is dramatic in terms of the sheer numbers flowing in, lack of shelter and ever worsening hygiene conditions.” The potential for disease outbreak, violence, and human rights abuses are of increasing concern.

The International Organization for Migration estimates that more than 350,000 refugees were detected at the EU’s borders between January and August 2015, compared with 280,000 detections for the whole of 2014. 2,643 people have died in crossing the Mediterranean so far this year.

Following the capsizing of two boats carrying 2,000 people in April 2015, leaders within the European Union have been struggling to address the crisis. Italy’s Premier, the French President, and Maltese Prime Minister called for an emergency meeting of European interior ministers to address the problem and by the end of April, the European Commission had proposed a 10-point plan that included an increase in financial resources to the routes that are used by refugees, increased human resources to process asylum applications, and a pilot project on resettlement.

The ability of European countries to manage these populations (by either accepting them or turning them back) is hindered by financial and political concerns. The presence and movement of refugees across Europe is also causing wider problems: Hungary has seen large protests from refugees in their country after the government chose to block their progress to Germany; police have had to protect refugees from abusive nationalist groups at Hungary’s border with Serbia.

While government responses are being negotiated, nongovernmental, private sector and multi-stakeholder groups are taking action. A spokesperson for the United Nations High Commissioner for Refugees, William Spindler, told Al Jazeera that it is the opinion of the UNHCR that European countries and their lack of cooperation are to blame for the deepening crisis. Furthermore, Greek Prime Minister Alexis Tsipras has acknowledged that nongovernmental and charitable organizations are filling the gaps and that “without them things would be worse.” Many of the well-established humanitarian NGOs have responded to the crisis, including Save the Children International, the International Federation of Red Cross and Red Crescent Societies, and Oxfam International.

Alongside these organizations, there are other GSNs working to address the crisis. One example, L’Auberge des Migrants, is developing a European-wide citizens’ response to counteract what it perceives as a hostile, security-focused, response from European politicians. The goal of their proposed ‘hospitality charter’ is to mobilize support in border areas across Europe to assist the thousands fleeing conflict and human rights abuses.

The International Council of Voluntary Agencies Network aims to increase collaboration and coordination between NGOs and other humanitarian actors. ICVA is a global network of non-governmental organizations whose mission is to make humanitarian action more principled and effective by working collectively and independently to influence policy and practice. The ICVA is currently supporting information exchange and collaboration between organizations working on the refugee crisis.

Working on migration issues globally, is the Migrants in Countries in Crisis Initiative (MICIC), housed at the International Organization for Migration, which is focusing on improving the situation of individuals displaced within and outside of countries facing conflict and disaster. The European refugee crisis continues to grow as people escape from conflict zones, repressive governments, and environments affected by climate change. To date, 4 million Syrians alone have been displaced from their homes since the civil conflict there began in 2013. As they struggle to survive, many are now living in refugee camps within Turkey, Lebanon, Jordan and Iraq, as well as within Syria itself. Another group, focused on Europe, is the International Centre for Migration Policy Development which, along with MICIC, is developing a set of non-binding, voluntary guidelines that set out principles, roles and responsibilities of different stakeholders vis-à-vis refugees fleeing a situation of acute crisis.

A privately funded initiative established by an Italian family called Migrant Offshore Aid Station is working to reduce deaths in the Mediterranean by providing vessels in distress with food, water, life vests and, in some cases, rescue. MOAS has brought together international humanitarians, security professionals, medical staff, and experienced maritime officers. Since its launch in August 2014, MOAS estimates that they have saved over 10,000 lives at sea.

In the face of overwhelming natural and man-made disasters around the world, governments and non-government organizations have struggled to respond effectively, innovate, and adapt to the changing landscape of crisis response and human security. GSNs are working to address the gaps, and doing what they can to help resolve political conflicts, instability, and crisis.