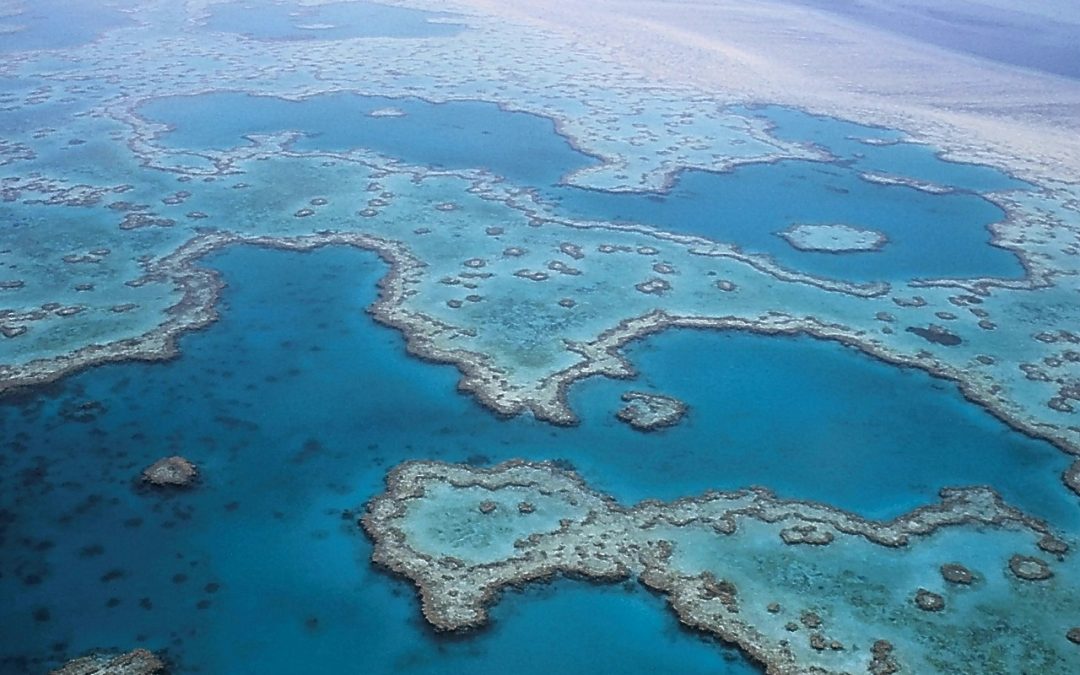 Coral reefs are remarkable, bright colored, teeming with biodiversity and supporting a complex ecosystem. But they can live only in narrow ranges of temperature, making them particularly vulnerable to the variations in ocean temperatures that are being caused by climate changes. El nino effects, pollution and environmental insults are impacting coral reefs around the globe, but perhaps most dramatically at the Great Barrier Reef off Queensland in Australia.

When ocean temperatures are too warm the coral becomes stressed and “spits out” the algae that provides it with nutrition. The coral begins to starve while waiting for cooler water temperatures, but if the temperatures don’t return to the normal range, the coral dies, becomes bleached and finally is blanketed with seaweed. With the decline of the coral comes a collapse of the ecosystem that depends on it for shelter and food. From the small fish that shelter in the polyps, to the larger fish that feed on them, to the birds, to the plants that are nourished by bird droppings and on up the food chain and finally to the millions of people who rely on the oceans for their livelihoods.

Recent scientific surveys of the Great Barrier Reef say that it is suffering the worst die-off ever recorded. The northern, and previously pristine, stretch of the reef has declined by nearly two-thirds. The Queensland government has committed to protecting the reef, and the Australian government has ratified the Paris climate agreement. At the same time, Queensland in bushing ahead with plans for development of the country’s largest coal mine.

At the end of November an update to a 35-year plan for conservation of the Great Barrier reef was sent to UNESCO—UNESCO and environmental GSNs have been studying the reef and working on solutions to protect if from further damage. At the same time the Northern Australia Infrastructure Fund has given conditional approval for a federal funding of a railroad to serve construction of a giant coal mine. The irony of simultaneously endorsing the ongoing use of the dirtiest of fossil fuels while increasing the potential for physical damage to the reef not only through the effects of climate change, but also via dredging and dumping plans connected to the mine construction has been at the top of the news feeds of climate and environmentally-focussed GSNs around the world.