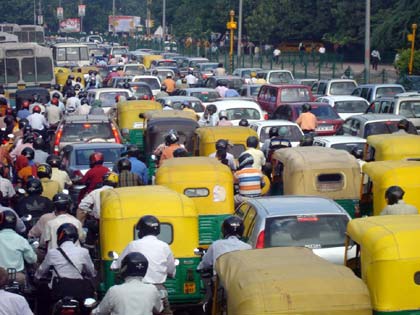 India is developing a “leapfrog” program to create a shared, electric, and connected mobility future that promises to provide Indians with clean, affordable, efficient, and reliable transportation options to support and enhance their daily lives.

As the Indian economy grows and more Indians are able to afford cars—and as the country’s population may soon be the largest in the world—the impact of gridlock traffic and auto emissions could become much, much worse. A radically different direction could avoid development sprawl and car-dependency. Most—if not all—vehicles in India could be electric, most cars shared, and cities designed for humans rather than cars by the end of the decade.

The shift would save the country billions in fuel costs and instead of 170 million gas and diesel powered vehicles (the number that might be expected with the population growth), transportation could be served with only 77 million vehicles. CO2 emissions would drop 37% and energy use in the sector would drop 64%.

India has already “leapfrogged” Western technology in other ways. In the early 1990s, 0.05% of the population had access to a phone. Instead of building landlines, it encouraged the growth of mobile phones and now there are more than 1 billion mobile subscribers in the country. Remote locations generate electricity through solar panels leapfrogging to renewable energy.

In India only 18 out of 1,000 people own a car (compared to 786 out of 1,000 in the US). The transition to electric cars will be easier, as there are fewer gas cars on the road to be replaced. Shared transportation is also already widely accepted. India’s premier national policy thinktank, The National Institution for Transforming India (NITI Aayog), and Rocky Mountain Institute (RMI), a global nonprofit organization focused on driving the efficient and restorative use of resources, developed specific and actionable solutions to transform India’s mobility sector at a February meeting of 75 senior representatives from the Government of India, the private sector, and civil society. The charette applied a systems approach to the mobility sector and produced a set of specific and actionable solutions designed to accelerate progress towards a mobility transformation.

Speaking to Fast Company, Clay Stranger, Director of the Office of the Chief Scientist at RMI, said,

The prevalence of shared mobility is completely accepted, used, and normalized in India. In some ways, you could almost argue it was invented there out of necessity. Auto-rickshaws that drive semi-fixed routes picking up passengers and dropping them off at not-predetermined stops as people need to board or get off have been a part of Indian life for at least the last century. Before that, it was bicycle rickshaws

The increase in population and increase in transportation needs coincides with global changes in both technology and transportation models for ride hailing. Battery costs for electric cars have dropped while battery life is improving. Stranger continues:

We see EVs right now at a tipping point. With any big system transformation, it’s hard to imagine the other side from where you sit today, but we see globally EV sales having grown 42% in 2016. We see EVs reaching sticker price parity with internal combustion engine vehicles in the early 2020s.

Electric cars are being manufactured in India already. Increased demand could also fuel a significant boost to manufacturing capacity. Ride hailing, which the government also wants to push, is already quickly growing in Indian cities. Electric cars, plugged into smart chargers that charge when power production peaks but demand is low, could help grids running mostly on solar and wind power run smoothly.

In the February charrette, the first phase, designed to build market confidence, anticipates electric vehicle incentives for manufacturers and consumers. New institutions would be set up to support the transition. By 2020, subsidies would shift to a market-led approach. Certain cities would pilot new technology and business models to be shared with the rest of the country. By 2023, both electric infrastructure and services like ride hailing would quickly scale through the entire country.Two-wheeled electric vehicles, which are already cost-competitive with their non-electric counterparts, would be emphasized first, followed by three-wheeled electric vehicles, and finally cars. It’s a different approach than the subsidy-heavy push for electric cars taken in China, where government support is leading to rapid adoption of EVs. India wants to drive the transition through the market, as much as possible, rather than through public funds.

The country would need to sell more than 10 million electric cars in 2030, compared with the almost 1.3 million on the road worldwide in 2015, according to the International Energy Agency (IEA). The goal also equals 10 percent of the 2030 target for electric vehicles on the road globally agreed to in the Paris climate talks. India’s potential plan to sell only electric cars by the end of next decade would require nearly eight times the global stock of such vehicles. Nevertheless, the IEA commends the vision put forth by the project.

While the details are yet to be worked out, it is an ambitious plan nonetheless. Regardless, the exact formulation of the target and the extent of its long-term achievement, it is a good step that will help India to be among the global leaders in deploying a technology that is crucial to temper increasing oil import needs, local air pollution in cities, and limit CO2 emissions.

One tech worker in Bangalore, who says that his eight-mile commute regularly takes 90 minutes, writes in a blog post that driving himself now seems like a waste of time:

It was about time in Bangalore where owning a car was no longer a status symbol (unlike in many other parts of India) and more of a “negative” status symbol–a person who was still driving his own vehicle to work was slowly being seen as someone who had lots of time on his hands and also as someone who couldn’t afford a cab !

The next generation may come from the research work being done by Uber and others. By jumping past the gas-fueled cars to meet the new demand, streamlines the transition to autonomous electric vehicles in the future. Fewer cars covering more miles is the objective, and higher-efficiency electric vehicles in a ride-share model may provide a reduction in environmental impact, traffic pressure, and costs even as the demand for auto transport balloons. India could serve as a model for other urban centers. Americans might also soon be driving Indian electric cars.