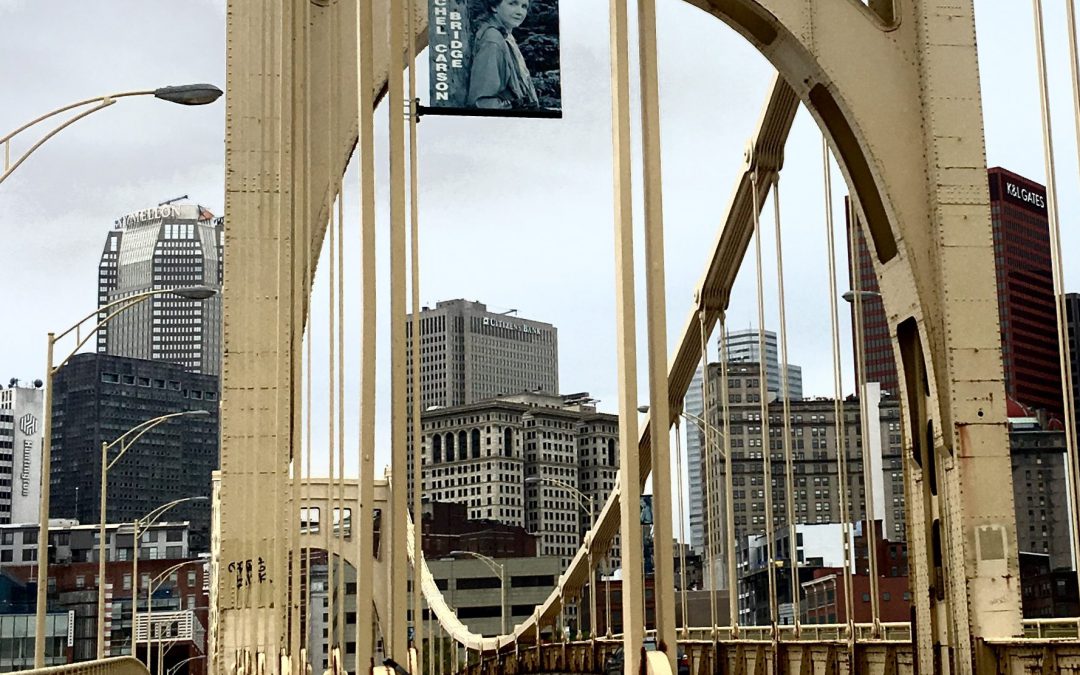 Walking to the Pittsburgh Convention Center along the Allegheny River in early October, I crossed the span of the Rachel Carson Bridge. Alone on the quiet riverfront I heard the distinctive honking of geese in flight and turned to see a small flock in v-formation glide under the bridge and head up river.

The significance of the moment—walking in an urban landscape to attend the annual conference of the Land Trust Alliance [a national land conservation organization of more than 1,000 member land trusts], and being buzzed by a migrating flock drawn into flight by the seasonal change in the weather while crossing a city bridge named for the pioneer of the environmental movement—was inescapable.

Fifty-five years ago Rachel Carson warned the world that the chemical DDT, widely used as an agricultural pesticide, posed a profound risk to humans and animals. Her landmark 1962 book, Silent Spring, was the watershed for the environmental movement. It took another ten years before public outcry led to a ban on DDT in 1972, rescuing many species from certain extinction, including the bald eagle.

In the years that followed, the public learned more, and involvement in taking action accelerated.

The Environmental Protection Agency was established in 1970, and the Endangered Species Act was passed in 1973. The dramatic expansion of the land trust movement in the seventies and eighties was a direct result of the alarm and concern that had been triggered by Rachel Carson’s seminal work.

The 1980s saw a national surge in land conservation, and a general acceptance that the planet was in grave danger of rising temperatures because of the “greenhouse effect” created by carbon emissions. At nearly the same time, the political winds began to shift. The corporate interests that are most threatened by the possibility of restricting the use of chemicals, and reducing reliance on fossil fuels, mounted a deeply funded defense using obfuscation and manipulated information that was widely spread by political interests and lobbyists.

As the clock ticked into the nineties—when government agencies and environmentalists should have seen expanding support for work on change and solutions—well-funded corporate interests managed to change the conversation. So, while stock prices soared, drilling expanded, and development spread, the atmospheric temperature was steadily climbing. Meanwhile, the corporate information machines assured the public that climate change was not a problem that needed solving.

Reading through the latest report from the UN’s Intergovernmental Panel on Climate Change—in which 91 authors representing over 40 countries cite a staggering six thousand studies—is a klaxon horn of concern for the future. The report reveals that we are on track for a 3° Celsius warming caused primarily by greenhouse gas emissions. Only a few years ago the target of concern was what seemed then to be an alarming—but now seems small—1.5 degrees. The Paris Climate Agreement of 2017—the latest accord in 25 years of international climate diplomacy, and the first one that the US has failed to support—targeted 2°C. Only two years after Paris, the slow-motion train wreck of climate change is speeding up at an alarming rate. The Arctic is rapidly unraveling, accelerating the release of methane that has been frozen beneath the ice, and large areas of the Middle East and India are already too hot and too dry for human habitation in the hot months.

As the planet becomes increasingly hot and crowded, the authors of the IPCC report predict a likely reality by 2040—just 21 years from now—that will see the swallowing of coastal cities and displacement of as many as 10 million people, food shortages that will affect hundreds of millions, substantial spread of tropical diseases, and as much as $54 trillion in climate-associated costs including increases in storm damage and losses from wildfire.

Refugees, human and wildlife, plant and animal, are already on the move around the globe, and the numbers will grow, driven inland and toward cooler latitudes as their geographic range is lost to heat waves and drought. Intensifying storms and fires will threaten food supplies and entire ecosystems as warming seas melt polar ice, fisheries lose millions of tons from annual catches, forests succumb to spreading blights and droughts, and agricultural land becomes unworkable.

This seems almost too big to solve, but the social reaction that banned the use of DDT could yet save our way of life. It’s an enormous challenge. It will require dramatic changes to energy creation, manufacturing and agricultural practices. But not doing anything will create even more daunting issues if the future arrives with no strategies to face the changes.

Honestly… the scale of the problem can make individual actions seem irrelevant. But, in fact, every little bit helps, and collective actions will have an impact, some of which are within our local realm.

The forests are one of the best natural machines the planet has for reducing CO2 in our atmosphere. Trees sequester carbon in large and lasting amounts, both in the visible plant above the ground and in the underground root and microbial systems in the soil. Plants in the understory and in cleared lands provide varied habitat for the animal species that balance the overall ecosystem, and ecosystem health is a critical goal. The Land Trust movement promoted open lands and wildlife protection with the goal of limiting unplanned development and maintaining connected open lands for wildlife movement and for the benefit of the human and the natural communities. Now it is clear that the tracts of land conserved through easements held by land trusts are an important part of a climate solution that is already underway.

Just as critical as controlling CO2 in the new normal will be maintaining water supplies and water quality. As drought threatens the lower latitudes in the not-to-distant future, the open, undeveloped lands that hold and filter the water in our watershed become increasingly important. The water sources, and water quality that we value in our lakes and streams, and in our wells and aquifer, can’t be taken for granted. We have a profound role in ensuring that the pure waters that we’ve always enjoyed in our region are preserved. By keeping and managing open land in the watershed, and planning low impact development, we may be able to maintain a pure water supply in a challenging future environment.

Speakers at the meeting in Pittsburgh included organizations working on intentional management of northern forests as a carbon “sequestration” strategy, that is the capture and permanent storage of carbon. The strategic thinning and planting of forests, and the careful planning for harvests of timber resources while supporting ecological systems, could be a strategy for both prosperity and environmental health.

The risk of disease in the forests looms as balsam, hemlock and ash are threatened by invasive pests and diseases, and have already left large tracts of dead and dying woodlands. Forest managers are focused on encouraging the species that are least at risk for the current threats in order to maintain a viable forest system in our region.

Landowners across the northern tier are applying the benefits of conservation easements as a way to protect in perpetuity the open lands that they control. As the growth of the acreage in these easements creates connected corridors for wildlife and water movement, the overall health of the open lands will be sustained, and the quality of the water in our lakes and our drinking water sources will be protected. The foresight of the land trust movement use of conservation easements, and the owners who have taken advantage of the financial incentives, may be an unexpected benefit to the entire region in the years to come.

The best time to take action was thirty-five years ago… but the second best time is now.