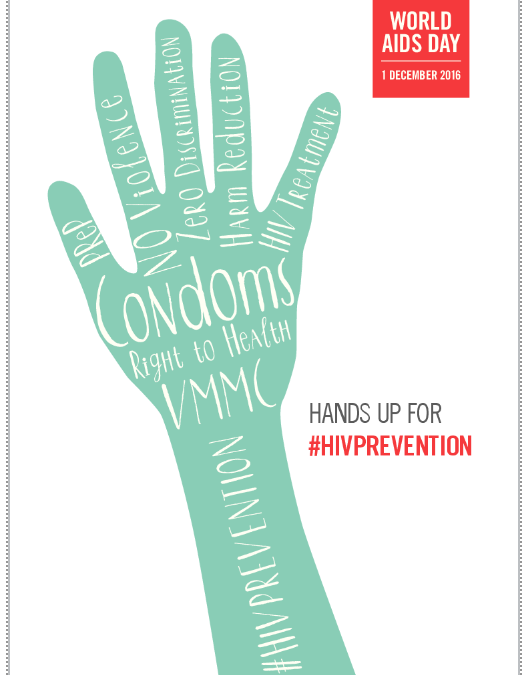 Raising Awareness since 1988—Hands Up for #HIVPrevention

December 1 is World Aids Day—designated in 1988 by the World Health Organization (WHO) to raise awareness of an epidemic that has killed over 36 million people. HIV/AIDS since it was identified in the early eighties, and continues to affect nearly the same number in countries around the world. Progress in the prevention and management of the disease has improved access to new antiretroviral treatment for the disease in many regions of the world. Still, much remains to be done to remove the stigma of the disease in many parts of the world where care is hard to come by  Many independent organizations focus their day-to-day work on the challenges of the AIDS epidemic in their regions as operational and delivery networks, and their local efforts are networked by events such as the World Aids Day into a Global Solution Network that is both an advocacy network and a knowledge network. The red ribbon is the global symbol for solidarity with HIV-positive people and those living with AIDS.

Each year a theme is selected for the event. The theme of the 2016 event is “Hands up for HIV Prevention.” The theme becomes a common thread for communications, programs, and regional efforts around the world. Much of the effect of the day is the symbolism, but the attention brought to the topic and the opportunity to pursue conversations about the issues of the epidemic have made the day an important part of the worldwide effort to cure the disease.

At its 37th meeting, the UNAIDS Programme Coordinating Board adopted a new strategy to end the AIDS epidemic as a public health threat by 2030. The UNAIDS 2016–2021 Strategy is one of the first in the United Nations system to be aligned to the Sustainable Development Goals, which set the framework for global development policy over the next 15 years, including ending the AIDS epidemic by 2030. According to the UNAIDS 2016-2021 Strategy report: “On the Fast-Track to end AIDS:”

The different epidemic patterns and institutions across regions of the world and their varying dynamics provide the rationale and opportunity for regional collaborative approaches to FastTrack the response… regional profiles of the epidemic, including people left behind, priority targets, the key cities and countries where particular gains are needed and game-changers for accelerating progress, as well as opportunities to further strengthen partnerships to meet regional goals and ensure accountability.

The work represented by the World AIDS Day participating organizations is a consummate example of the type of multi-stakeholder collaboration that exemplifies the Global Solution Network model. While the organizations are addressing the critical aspects of the crisis in their localities, the opportunity to pool the knowledge and operational techniques they develop amplifies the efforts of all the local organizations into a global solution.